Blockchain in the Warehouse

With the sudden rise of Bitcoin at the end of 2017, Blockchain has become a mainstream term. But a lot of people still don’t understand the...

With the sudden rise of Bitcoin at the end of 2017, Blockchain has become a mainstream term. But a lot of people still don’t understand the incredible potential this technology holds, especially in its role in the supply chain and the warehouse digitalization movement.

This article will be your primer for Blockchain technology, its potential in warehouse operations, and how it fares in the industry.

Blockchain is a distributed ledger technology that exchanges record transactions between parties in a secure way. To put it more simply: it is blocks of data that are chained, hence the term Blockchain, which are shared by all computers in a network, thus making them accessible to relevant parties.

Blockchain brings three main features – Accessibility, Security, and Accountability. Blockchain, being shared by all parties, makes data accessible for everyone involved. The data is stored on every computer, so that it is both decentralized and distributed. This creates a high level of security because hackers would need to access and alter the data on all linked computers at the same time just to change one transaction. As a single, fixed cache of information, Blockchain ensures accountability by everyone in the network. 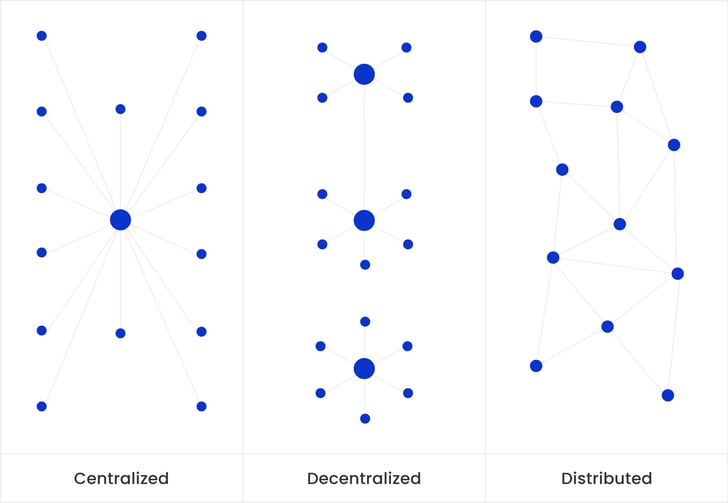 This distributed approach to data management makes Blockchain a preferred platform to protect data and increase accountability while making it easily accessible to the intended parties.

Blockchain’s Role in the Warehouse

Excellence in logistics is achieved by seamless collaboration between every stakeholder in the supply chain, including the warehouse. Having many entities involved with multiple complex technologies results in weak collaboration and limited transparency. Blockchain will link relevant parties on the same data platform while guaranteeing data security and easy communications.

When paired with IoT (Internet of Things), new data can be automatically updated in this unified ledger. For example, meat in transport must maintain a temperature of 4°C or less. With Blockchain and IoT, it is possible to verify and record its temperature at every step of the supply chain while keeping the data protected and accessible. This makes verification easy for the whole supply chain as both technologies report the food’s state. In addition, Blockchain in the food supply chain will do wonders for safety, as explained by Walmart, in partnership with IBM, in this video below: https://youtu.be/SV0KXBxSoio

Also, Smart Contracts, which are self-executing contracts with terms of agreement between two parties written into lines of code, can be utilized by the warehouse to automate verifications and payment. For example, when a connected pallet is delivered, the received confirmation, time of delivery, and condition will be transmitted to the Blockchain system to be verified, so long as they are in the agreed conditions. If verified, proper payments will be released to the appropriate parties. This type of automation greatly increases efficiency, integrity, and security. 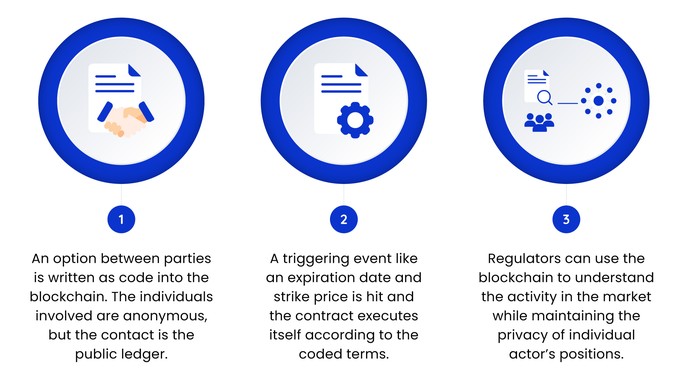 Where is Blockchain in the Industry Now?

According to the MHI Annual Industry Report 2020, only 33% agreed that Blockchain has the potential to create disruption in the industry or competitive advantage for their business. In addition to that, the report cites the following adoption rates over the next few years: 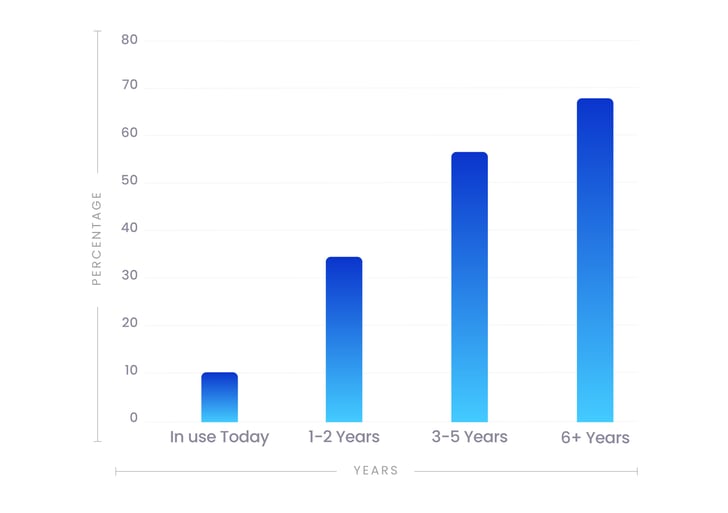 To determine Blockchain’s position in the industry, three adoption frameworks will be used – The S-Curve of Innovation, the Technology Adoption Life Cycle, and the Hype Cycle.

Blockchain is currently in between the Ferment and Takeoff stage of the S-Curve. To be more specific, it is close to reaching the Takeoff phase, which indicates that the technology is close to overcoming a significant obstacle. At this point, it is yet to be adopted by the Early Majority.

Blockchain is now being adopted by the Early Adopters. As mentioned by the 2020 MHI Industry Report, 10% of the respondents are using Blockchain, which puts it above the Innovators group but not yet at the point of crossing the chasm.

Gartner has placed Blockchain at the start of the Peak of Inflated Expectations. This position in the curve means that Blockchain is about to receive its highest publicity. But despite the promotion, it is still unclear whether the technology would become a success or failure. However, projects such as IBM’s Blockchain supply chain are steadily pushing it out of the hype and into the supply chain industry. Ginny Rometty, IBM’s CEO, even said…

"What the internet did for communications, Blockchain will do for trusted transactions."

The Hype Cycle also suggests that Blockchain will reach the plateau in 5 to 10 years, meaning potential adopters still have time to evaluate the pros and cons. 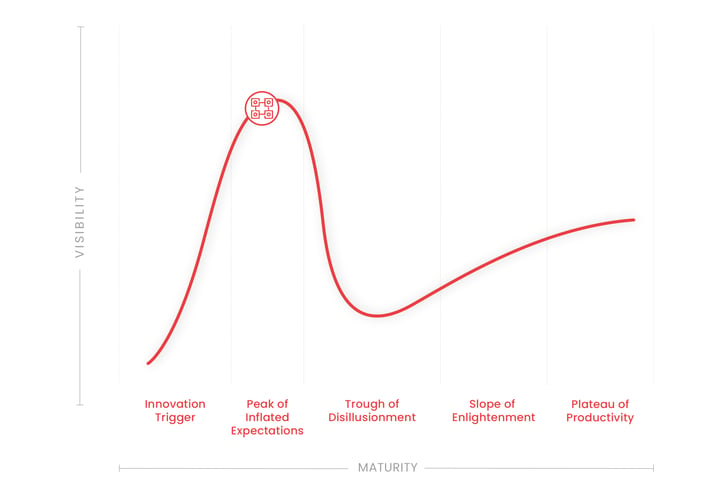 Blockchain is slowly moving forward from being an edge to an opportunity to later an essential. Big names such as Walmart, UPS, Maersk, FedEx, British Airways, and Samsung are implementing the technology for their supply chains. In fact, startups built as recently as 2017 are using Blockchain as their core technology or edge in the market.

Blockchain in supply chain management will strengthen the collaboration and data sharing that the industry has sought for many years. Blockchain will address long prevailing concerns such as security, privacy, and control over data. No doubt, this emerging technology is something that supply chain leaders must not ignore.

To learn more about Blockchain in the warehouse, along with six other important warehouse technologies, click "Get the Guide" below.

If you want to learn more about Warehouse Digitalization and optimizing warehouse process, you can follow us on LinkedIn, YouTube, Twitter, or Facebook. If you have other inquiries or suggestions, don’t hesitate to contact us here. We’ll be happy to hear from you.

Is a Cloud Logistics Technology Solution Right for Your Business?

Have It All: IT Talent, New Tech, Reduced OPEX

Leaders in the logistics industry are facing a pioneering challenge: innovations in logistics technology are increasing at a rate surpassing the output of IT talent capable of addressing the specific...

Wearable Technology: The Future of Logistics

The Ultimate in Logistics Mobility The logistics industry is rapidly changing as technology advances. Many of the technology solutions coming to market have the potential to improve supply chains at...