Is it Time to Adopt Internet of Things (IoT) in the Warehouse?

As in transportation and healthcare, there seems to be much excitement about the Internet of Things (IoT) in the warehouse too. But, what does IoT...

As in transportation and healthcare, there seems to be much excitement about the Internet of Things (IoT) in the warehouse too. But, what does IoT mean for the future of warehousing? Does it fit here as well?

For practical application of this technology, it is important to understand how it can be used in the warehouse to increase efficiency and visibility. This blog post explains the very basics of the Internet of Things, what it can do for the warehouse, and when it is the right time to invest in this upcoming warehouse technology.

IoT, also known as the Internet of Things, is a network of interconnected physical objects accessible through a digital network (e.g. the Internet) that form an ecosystem of smart items that are capable of capturing and exchanging data (e.g. location, temperature, etc.) in real-time.

The connecting points could be a person with a sensor strapped on, a cargo with a temperature sensor, and/or a forklift with a motion sensor. All devices in this ecosystem can collect and share data in real-time to report on their state, environment, and usage.

According to DHL, by 2020, there will be more than 50 billion objects connected to the Internet.

What are IoT Sensors?

Sensors are small devices capable of detecting physical variables like heat, movement, humidity, temperature, pressure, etc., and converting it into comprehensible/readable data. The simplest example of IoT is that of a motion sensor connected to a forklift or an RFID label attached to a package.

In the case of the forklift, the motion sensor can detect the speed in relation to its proximity to a bin, send the information to the computer, analyze it, and issue a command to the forklift to either slow down, alert the driver, and/or block the movement. In the case of an RFID label attached to a package, it can be used to track its location within the warehouse.

Because IoT sensors are interconnected, they have the capability to collect and exchange data, and pass it on to computers to analyze, streamline, and orchestrate warehouse operations in a way never done before.

How does IoT Work in the Warehouse?

While computers and radio frequency devices are not new in the warehouse, IoT is. IoT devices augmented by the evolution of artificial intelligence, have not only amplified the capability for collecting data, but also turned data into intelligent decisions and commands to perform specific actions. 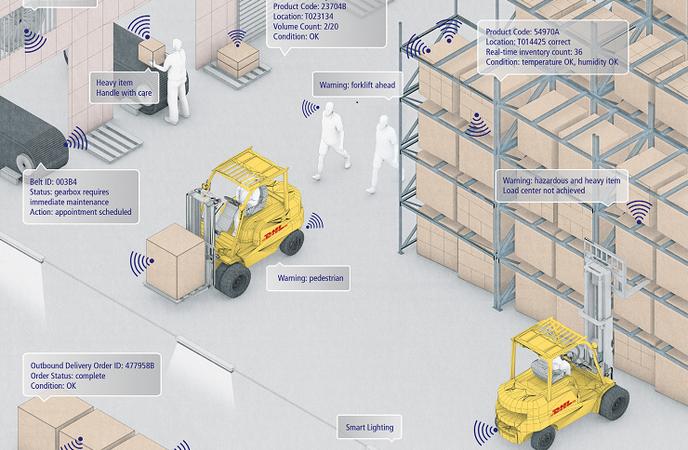 Source: Internet of Things in Logistics by DHL & Cisco

Collecting data such as temperature, location of inventory, movement of warehouse clerks, etc., makes IoT an instrumental technology in the digitalization of the warehouse.

Here are a few benefits of sensors and IoT in the warehouse:

Warehouses may consider using IoT for inventory management for the following reasons: 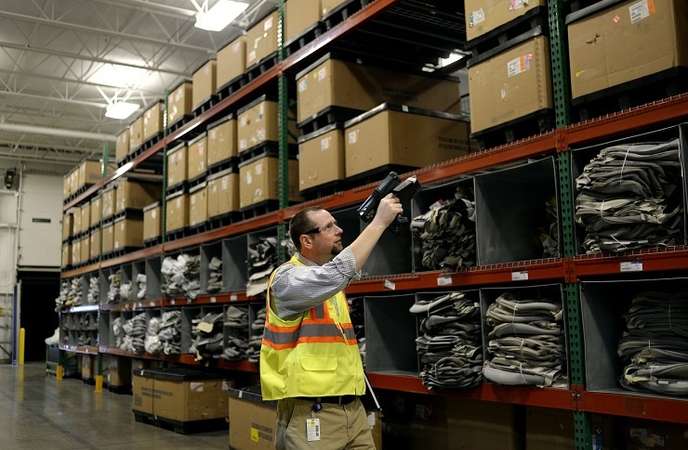 Gaining operational efficiency through IoT in the warehouse is possible in more ways than one:

Visibility throughout the warehouse is the soul of warehouse digitalization. The very concept is now turning the Internet of Things into the Internet of Everything by having not only things, but also locations and people connected. In fact, this revolutionary feature of IoT is changing the entire supply chain landscape.

Here is what it does: 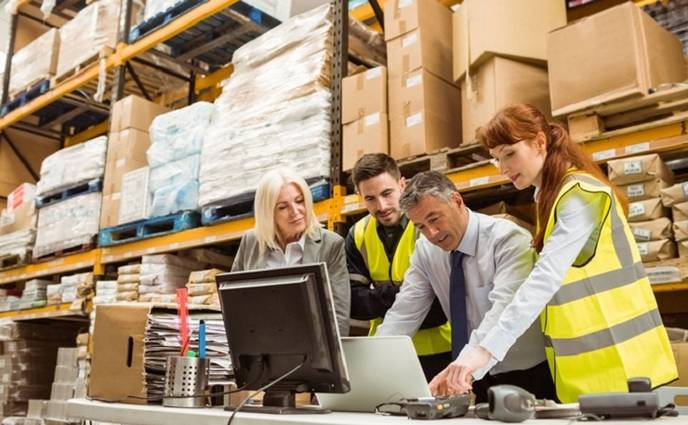 With all that excitement about IoT, there are three questions that arise in the minds of decision makers looking to adopt cutting edge warehouse technologies.

Here are the answers to these questions.

According to the 2020 MHI Annual Report, that surveyed 1,100 industry leaders closely connected to warehousing,

Planned adoption rates for IoT and sensors in the next 6 years are promising. 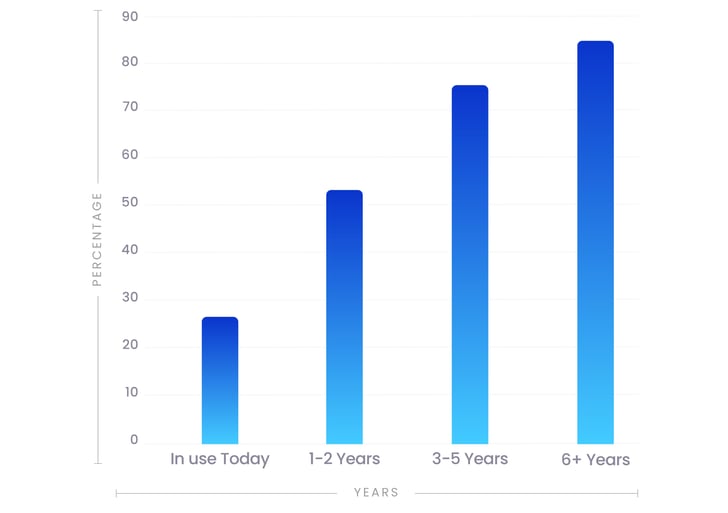 Where is IoT Now?

To determine the present standing of this technology, we need to assess it in relation to the Innovation S-Curve, the Adoption Life Cycle and the Hype Cycle, three important frameworks that decision makers should consider when investing in warehouse technology.

The Internet of Things stands between the Takeoff and Maturity stages, which means that it has displayed the ability to overcome important obstacles and has been adopted by the Early Majority. This position also suggests that it's reaching the point where the majority of the public will be adopting it, meaning that the risk associated with investing in this new technology is minimal. 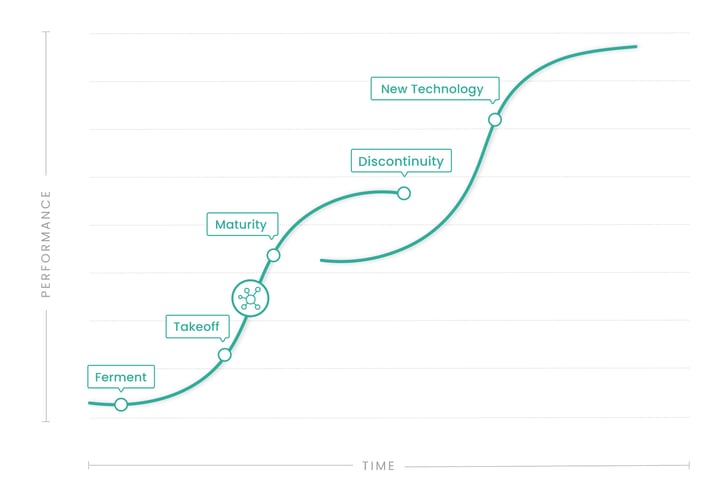 IoT is being adopted by the Early Majority, which tells us that more businesses are adopting and embracing IoT and are finding fit and benefits within their operations. At this point, IoT has crossed the chasm of death, which indicates that its fate is likely to be a success. 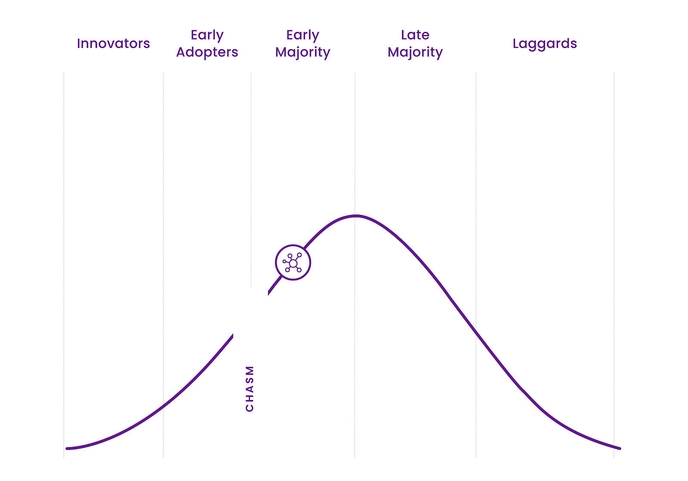 Lastly, the Internet of Things is sitting on the Slope of Enlightenment. This means that both consumers and the industry understand the scope and potential benefits of IoT. It is also near to reaching the Plateau of Productivity, where technologies are deemed to be widely adopted. 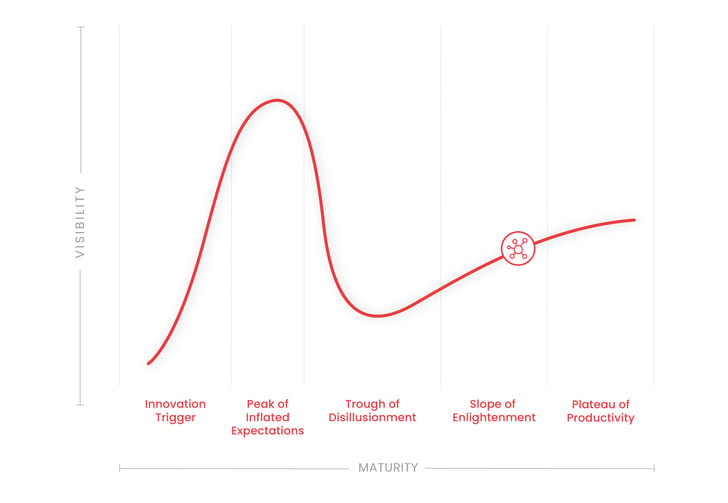 IoT is one of those technologies with the potential to revolutionize and digitalize warehousing operations; to connect the disconnected points, make warehouses smarter, and provide a level of visibility never seen before in warehouses or distribution centers. If your organization is not ready to adopt or test it yet, we highly recommend that you start monitoring this technology and keep learning more about it.

To learn more about IoT and six other important technologies that will transform the warehouse, click "Get the Guide" now.

If you want to learn more about Warehouse Digitalization and optimizing warehouse processes, you can follow us on LinkedIn, YouTube, Twitter, or Facebook. If you have other inquiries or suggestions, don’t hesitate to contact us here. We’ll be happy to hear from you.

5 Essentials to Get Your Warehouse Ready for E-Commerce

Should You Adopt Predictive Analytics in Warehouse Management?