Did you know? E-commerce sales are set to skyrocket from $2.8 trillion in 2018 to $4.9 trillion in 2021 according to Statista. With warehouses already struggling with workforce shortage, companies are desperately looking for ways to keep up with or even capitalize on increasing consumer demand.

A solution to overcome this is investing in warehouse technology, particularly in robotics, to achieve an autonomous warehouse. Here’s what you need to know.

What is Robotics and Automation?

Robotics is a branch of engineering and science that deals with the design, construction, operation and use of robots that can be programmed to do certain tasks. These robots can then replace humans by performing repeatable tasks in a consistent manner and can also be used in hazardous environments in place of humans.

Automation, on the other hand, refers to sets of operations that can be performed with minimal or no human assistance. Investing in both technologies is your first step to achieving warehouse automation.

The Value of Robotics and Automation in the Warehouse

As anyone in the warehousing industry is aware, warehouses are filled with repeatable, process-oriented, and error-prone operations. Robotics and automation can take over the repetitious tasks (picking, receiving, put-away) from humans to achieve more consistent, accurate, and productive warehouse operations.

This improves employee engagement and retention rates by relieving employees from the dullest and most repetitive tasks. Instead, employees will tackle other roles such as customer service, maintenance, and operational analysis. This also results to a safer warehouse, as automation keeps humans away from the heavy equipment, machineries, and all types of hazardous working environments (e.g. extreme cold and heat). For more information about warehouse safety, read this article.

Robotics and Automation also allows the warehouse to have 24/7 operation, which is especially necessary in today’s age of rising e-commerce. Fully automated warehouses will require little to no human intervention, thus mitigating the industry’s workforce problems.

Realistically, today’s warehouses are implementing partial automation. A famous example is Amazon Kiva robots, which do goods-to-person picking. This eliminates the picker’s walking time to vastly improve the warehouse’s efficiency.

A newer implementation of automation is Ocado’s warehouse robots, which are able to fulfill 65,000 orders every week. 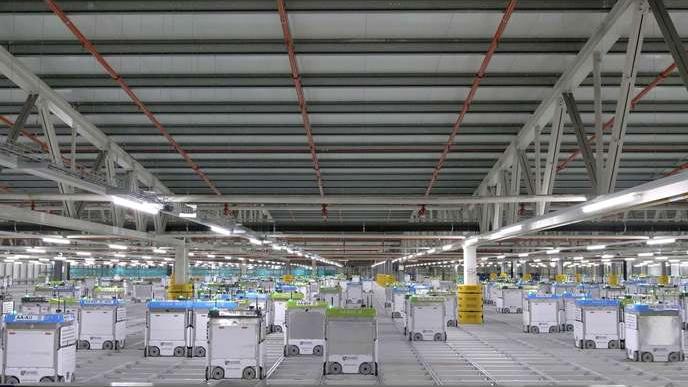 As technology progresses, robots will be able to take over more warehouse processes, which is a step closer to an “always-on” warehouse.

Considering the inefficiency of some employee-dependent processes, rising compensation rates, and safety risks, robotics and automation is becoming easier to justify as the technology becomes less costly.

Where is Robotics and Automation in Warehousing Now?

According to the MHI Annual Industry Report 2020, Robotics and Automation is currently one of the most widely adopted warehouse technologies. Thirty-nine percent of the 1,100 respondents are already using it, demonstrating its worth to the industry.

For the S-Curve, Robotics and Automation are in between the Takeoff and Maturity stages. This position suggests that the technologies have overcome a significant obstacle to adoption and have been implemented by the Early Majority of adopters. 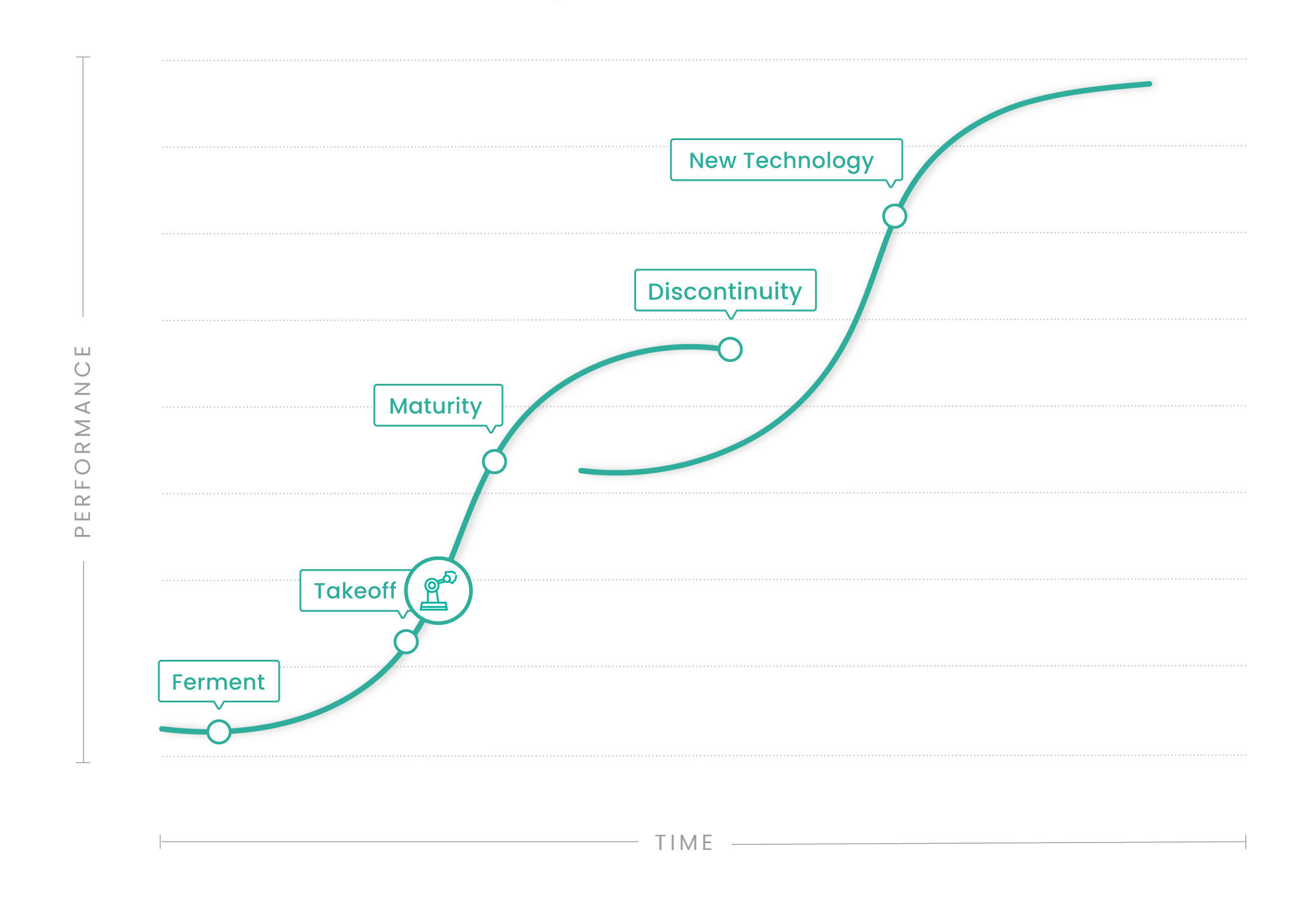 Robotics and Automation are now being adopted by the Early Majority. This indicates that decision makers are seeing the benefits of the two technologies and how they are a fit to their businesses. Furthermore, being adopted by the Early Majority indicates that Robotics and Automation have crossed over the Chasm of Death, which means that they are most likely to become standard technologies in the industry. 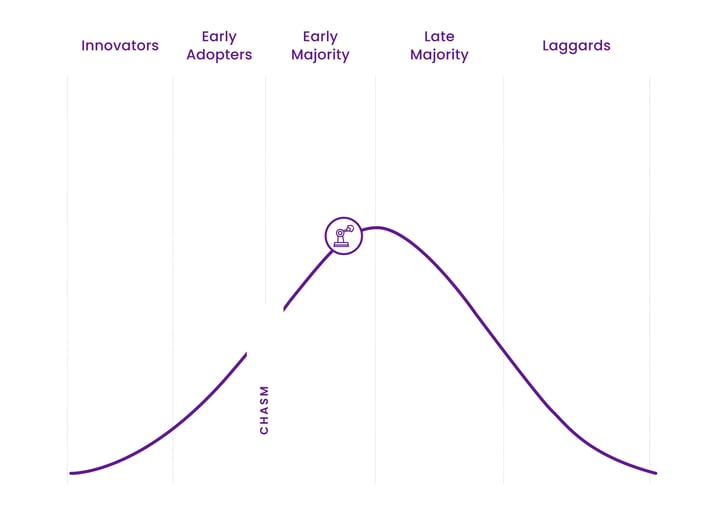 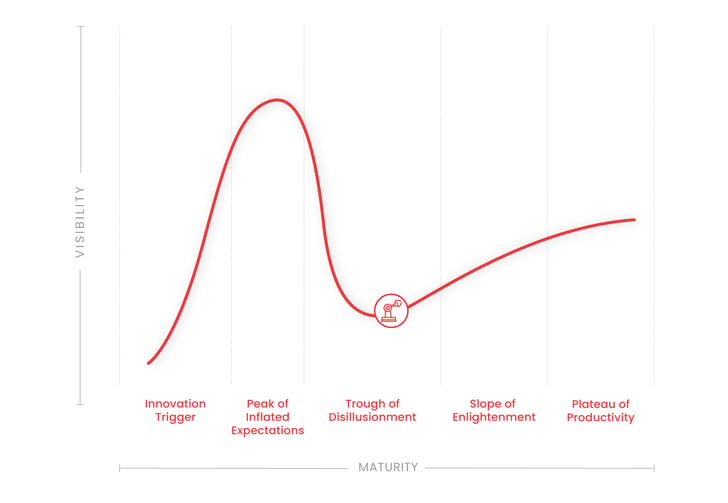 Robotics and Automation is very close to being standardized and is one of the front runners of the warehouse digitalization movement. With the current state of the market, adopting this technology now will bring you the most benefits and will help you stay ahead of the competition.

To learn more about robotics and automation, as well as six other important technologies that will transform the warehouse, click "Get the Guide" now.

If you want to learn more about Warehouse Digitalization and optimizing warehouse processes, you can follow us on LinkedIn, YouTube, Twitter, or Facebook. If you have other inquiries or suggestions, don’t hesitate to contact us here. We’ll be happy to hear from you.

When to Invest in Warehouse Technology

What is Staff Augmentation? Easy to Understand Meaning

How to Build a Great Customer Experience & Double Your Sales

Every month I meet with 25+ Logistics leaders and decision makers. I always have one question for them: What is impacting your bottom line? They all agree that one of the biggest impacts on their...